The Brainstormer is here!!! 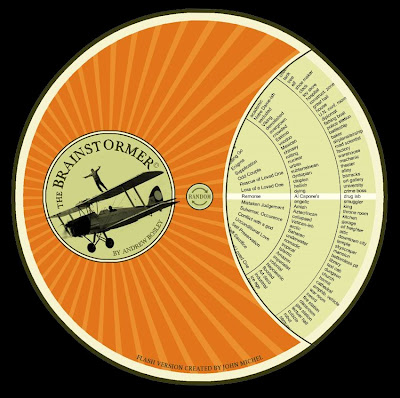 Long Post Warning! If you want to go straight to the more cool parts, just find the link near the bottom of the post or go to the link on the sidebar under "Cool Tools". But you'll miss a good story, you know.

Hey all! It is finally finished! I wanted to share something that I've been working on for a long time. When I was in school at SJSU, studying visual development and illustration, I was always trying to give myself little concept projects to keep myself sharp and thinking. So I created a list of objects, persons, things, etc. and a list of styles, adjectives, etc. These very large lists were in the back of my very first Moleskine (an address book used as a sketchbook). The idea was to combine an object or person with a style or adjective (ex. Byzantine submarine or subterranean factory) to create unique and interesting combinations to concept out and illustrate.

I found it useful in it's crude form, but always wanted to turn it into a small, more sophisticated pinwheel format. Finally, a few months ago, during a lull in freelance work, I decided to make it happen. I inputted the lists into a free vector program called Inkscape. Designed a cover for it and called it the Brainstormer. I also added something new in this version: A story conflict list. I've spent a lot of time reading about stories and screenwriting since school and I recently found an interesting book called The Story Structure Architect. It broke down every plot idea into about 50-something different categories. I used this and narrowed it down to 45 for my Brainstormer. The point being to add greater depth to the combinations. Sometimes I would want to create an actual illustration from the designs I created for myself. But I needed a story if the illustration was going to be interesting. So this new ring of conflict ideas was a way of adding context to the concepts that came from the Brainstormer. When it was all designed and done, I had a nice paper version I could carry around in my current Moleskine sketchbook/journal. It looks just as shown above (minus the random button).

But when I showed it to some friends at work, they thought it might be cool to have a digital version of it. Obviously that would be very convenient for anyone who is on a computer all day. I had planned on posting the jpgs of each ring and cover so anyone could make their own without starting from scratch, but a digital one was even better. I didn't have the expertise or the programs to make that possible, but a good friend from work, John Michel, did. He was kind enough to offer his time to turn this idea into a Flash animation. We ironed out some quirks and John turned it into a really cool, animated, fully interactive program. He was also kind enough to store it on his site, until I finally make a site of my own.

I am posting it here for the first time and hoping that it's something others can benefit from.

You'll notice when you play around with it that you have two ways of working with it. You can just use the random button in the middle, which will spin the wheels into different combinations. Or you can manually spin each wheel independently. I absolutely love what John has done with it! It's better than I could have ever imagined. Anyway, I hope that y'all will find it useful as well! Thanks for visiting!
Posted by Andrew Bosley

My god that is genius! You deserve medals. Thanks so much for sharing this, I'll use it no doubts! I hope you don't mind if I link it up on my blog. Cheers!

This is a great tool. Thanks for sharing it with us!

Truly brilliant!There are so many good combinations in it, some sound even a bit humorous, thanks alot for sharing this tool. Cheers

Good jobs on you and John! This is really cool!

This is a lot of fun! Thanks for posting this Andrew.

I recommended this to drawn.ca

I hope they'll give it the exposure it deserves!

Thanks guys! I appreciate the recommendation, Finn!

Saw it on Drawn! today, congrats and great idea. Now where is my IPhone App version?

This is great and not just for drawing! I will make great writing prompts for short stories or writing exercises! Fantastic tool!

ps. I'd love jpgs of the "physical" version to print for when I'm away from the computer (plus just having something tangible is nice)

Just Amazing....
I just have to ask you if you don't mind if i translate this into spanish...

I think is a great way to open our creative side, and I know english, so i can help you to translate it..

I hope you can think about it.

Thank you again for this great tool.

Well done Andrew! Great tool. I used the "Random" button to generate the inspiration for my Movie Pitch Project post today. Check it out at thewordplayer.blogspot.com

This is the most brilliant thing I have ever seen. Who needs the muse whenyou have this. Awsome.

This is fantastic.
Now I don't want to sound unappreciative but...

wouldn't a version be wonderful that used an external txt file so you could edit the content??
Neil

What a great tool. You really ought to patent this and sell it. Hard copy versions would be great to have in the car for long road trips.

Sure would beat the license plate game!

Is this available in hardcopy? I'd like to buy this.

Thanks for sharing.
It´s a great job.

Thanks so much for posting - I really appreciate it! Jepne

WOW!!! Hey guys! Thanks for all the kind feedback. I'm glad that everyone's liking it. Hey Dave! I'm hoping to make a iPhone app for this...as soon as I figure out how to do it. I would also like to make some hard copies, but they take a while to make and my printer probably couldn't take it. If anyone has any ideas on how to do it in a profitable way, I'm all ears. Anyways, I'm glad that everyone likes it. I'll post an update if anything new develops with this. Thanks again!!!

Hey Neil! Yeah, being able to edit the list would be great. I was just thinking that a whole ring for animals might be cool, for me at least. There are so many possibilities. My friend John (the flash expert) and I talked about this when we started. It's something were hoping to get to. Hopefully the current selections will keep everyone busy enough for the time being. But keep checking the blog. There will probably be some improvements eventually.
Thanks for checking it out!
Andrew

Fantastic work!thanks for your sharing!
But i have one little question to add on: how to make the selected elements to match a certain idea concept or theme?

You should do one for individual characters.

Andrew, I really like what you've done here. The digital version is great, and there's still a lot to be said for having a physical version that engages people kinesthetically.
I've created a creative thinking and storytelling game called Rory's Story Cubes™ (http://www.storycubes.com). It's been used by a few illustrators for inspiration (http://www.thecreativityhub.com/storycubes/yourcreations/)
If I can help give advice on making a commercial version, please let me know. It's not as simple as it seems - but still worth doing! There's nothing like getting paid for something you've created yourself.

I love it! Thanks a lot for sharing this with the world! :D

Your brain stormer came to me via Feed blitz for writers. Good idea, I've added it to my favourites.

Thank you very much and I look forward to giving it a whirl.

Coolness - I will use it.

Awesome and fun little tool! Glad your friend had the skills to make all your hard work come to fruition!

I found this little resource that I thought many users here could also make use of. It's called the Laugh-o-matic!

It's a pretty good little utility similar to the Brainstormer, based on the Laugh Finder from the Cartoonist Exchange course that used to be offered between the 1940s and somewhere into the 1970s.

It gives you just enough of a jump start to spark your own creativity. Check it out. Between the Brainstormer and the Laugh-o-matic!, anyone here that uses them has two pretty great resources.

great tool. Thanks for sharing your creativity. Love the idea of having IPod app for it also. Thanks!

Dude, Andrew-
This is brilliant man!!!

An iphone version would be AWESOME!

Great work -- you're a genius.

this is the coolest love it!

thanks for sharing Andrew!!! awesome idea!

Just Amazing....
I just have to ask you if you don't mind if i translate this into Spanish...

This reminds me of Mark Tansey's Wheels.

really love this- would love to mention it on my own blog, permission?

Wonderful! It already inspired a few new ideas for me. Number 1 on my bookmarks now!
P.S. LOVE your artwork!!!

Hey Andrew! This is great! I know I'll be putting it to good use! Thanks for sharing.

I'm a HS English Teacher--this was posted on a teaching newsletter. I'm so anxious to use it. Thanks for your work and vision!

This is brilliant. Thanks for sharing Andrew!:)

wow that is AMAZING!!!! It could be used for so much more then art. Brilliant really. If you ever do make it in a hard copy version I want it too. Or one that could be edited. The animal idea is awesome.
(I got race car, ice age and Prey to Misfortune) Sounds like a Disney movie.

Random chance is awesome. I found your site through Stumble, then I took the Brainstormer for a random spin and got "remorse flooded skyscraper". I may need to write a story for that one! Thanks for a wicked fun ap.

This is both fun and useful. And elegant.

I've been clicking the random button for a long time and i come with more and more ideas that i don't have time to make anything with them.

Scientific-Juggernaut-Mistake or something like that it's already done (Godzilla) :)

I agree with 'coffman'' - where's the iPhone app? The Brainstormer is perfect for writers, especially those with writer's block, or looking for a new story. But seriously, you could make somed money off this as an iPhone app. Guaranteed!

I think this is brilliant. Did you ever post up the individual components for constructing your own anywhere? Just because I'm an English teacher so would absolutely love to get my students to make their own. Keep the excellent ideas coming! Thanks, Emma

For anyone following these comments, the Brainstormer iphone app is now on sale in the app store! I'll put up a post later today!

this is so brilliant it should be used in all English classes!

This is so brilliant it should be used in all English classes!

How awesome is this? I do wish I had the "crude" one too.

As a teacher for 35 years, it is great to see a digital version of the 'Spin the Wheel' story combinations that I have used for creative writing in my classes.

I have added a link on the page headed 'Links Literacy' on my class blog at http://sormid67.edublogs.org

Welcome to my blog!

Freelancing away in Prescott AZ!
For illustration and concept commissions please contact me at andrew@bosleyart.com! Thanks!